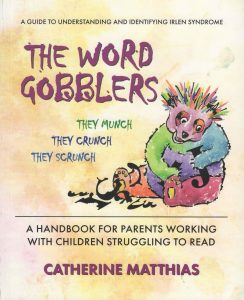 The Word Gobblers: A Handbook for Parents Working with Children Struggling to Read is Catherine’s newest release, published in 2021, Square One Publishers, 2021. The book begins by explaining what the signs of Irlen Syndrome are. It then provides a questionnaire designed to alert you to what behaviors to watch for in your child. This is followed by exercises to help you determine if you should take the next step–having your child evaluated by a Certified Iren Syndrome Screener. The Word Gobblers will also show you a few modifications you can make immediately to ease your child’s symptoms and discomfort.

—Review from the Library Journal

VERDICT: A helpful volume for parents, caregivers, and teachers of children who struggle with reading.

Matthias posits that one in three children who have been diagnosed with dyslexia might instead have Irlen Syndrome, in which certain color wavelengths reach the brain more slowly than other wavelengths, affecting the ability to read. She discusses practical aspects of Irlen Syndrome—from defining the disorder, to treatment, to advocating for one’s child—as well as the emotional toll of learning disabilities. One chapter also includes questions to help children express their feelings about issues like bullying. 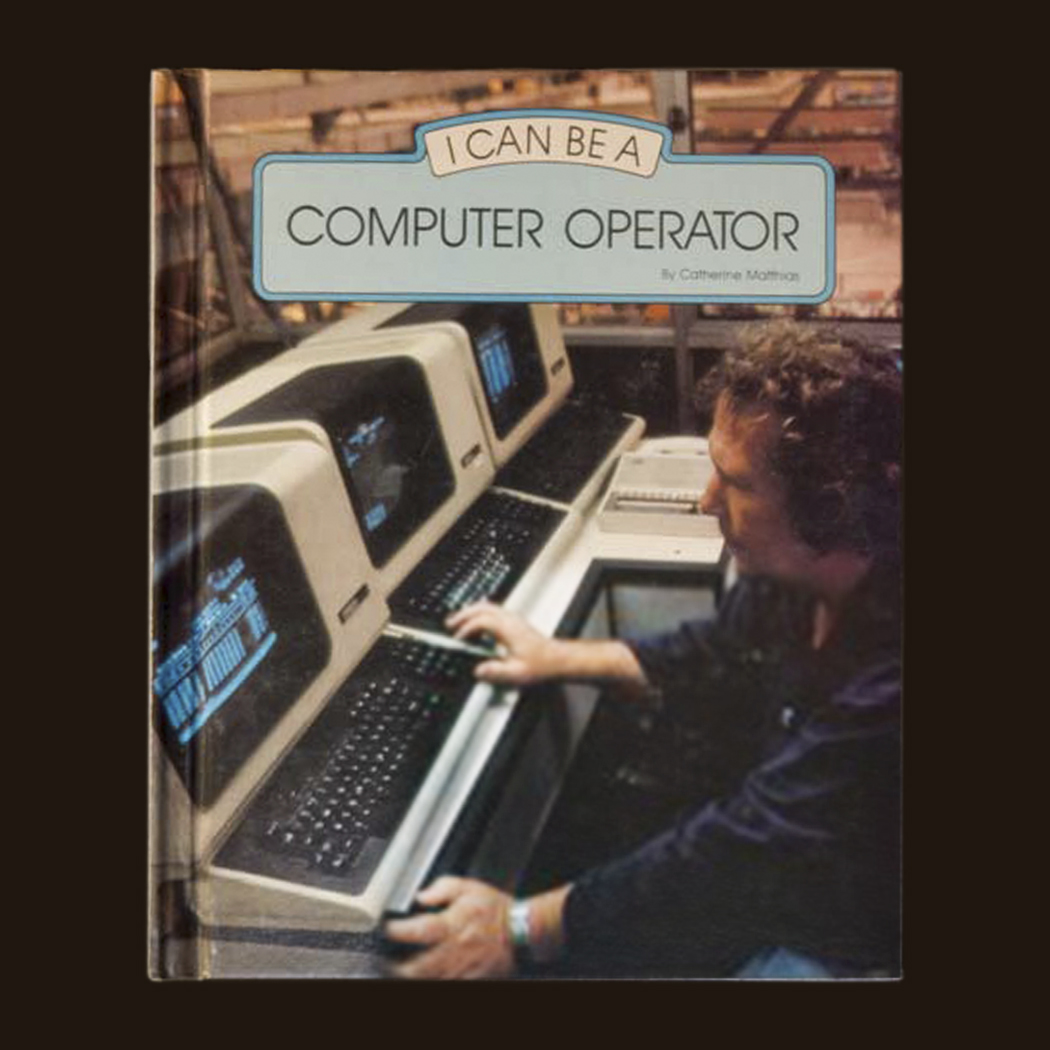 I Can Be a Computer Operator describes the many uses of computers, from banking to business to police work and firefighting and engineering. Provides a vocabulary list of words for children to understand in order to explore this subject. Published in 1985, it was one in a series of books developed by Children’s Press, now an imprint of Scholastic, to learn about various occupations. Uses both photographs and illustrations.

I Can Be a Police Officer, published in 1984 by Children’s Press, an imprint of Scholastic, was one in a series of books exploring various occupations. This book covers aspects of police work from training to working in teams to detective work. Provides a vocabulary list of words for children to understand in order to explore this subject. Uses both photographs and illustrations. 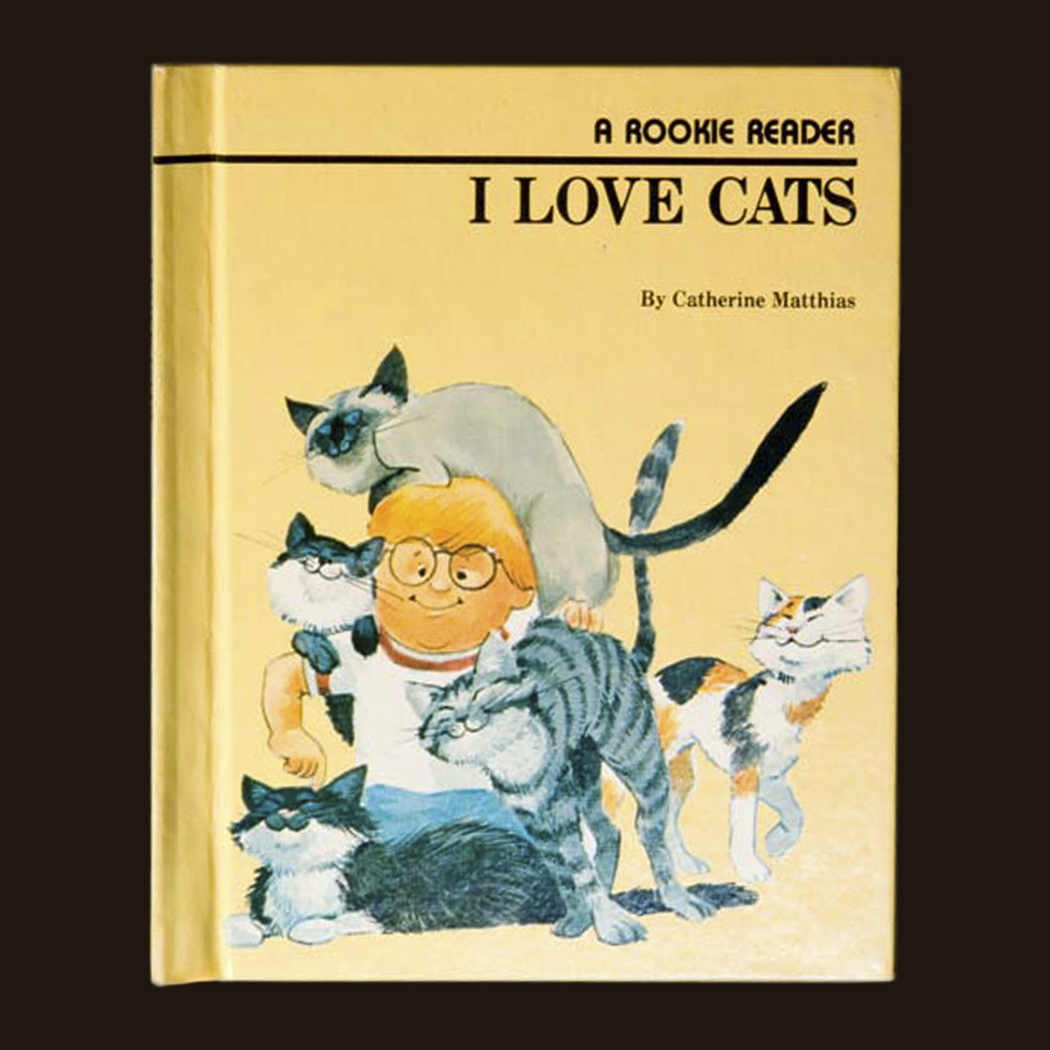 I Love Cats is a Children’s Press (Scholastic) Rookie Reader for early readers.  Published in 1983, it received its 28th printing in 2004, and became part of a three-book boxed edition along with Too Many Balloons. The book features a boy who likes mice and cows and puppies and bunnies and all kinds of critters, but loves cats. Told in rhyme using 56 different words. Includes a vocabulary list, and meets the following Reading First initiatives: Phonics – Vocabulary – Comprehension – Fluency. Illustrated by Tom Dunnington. 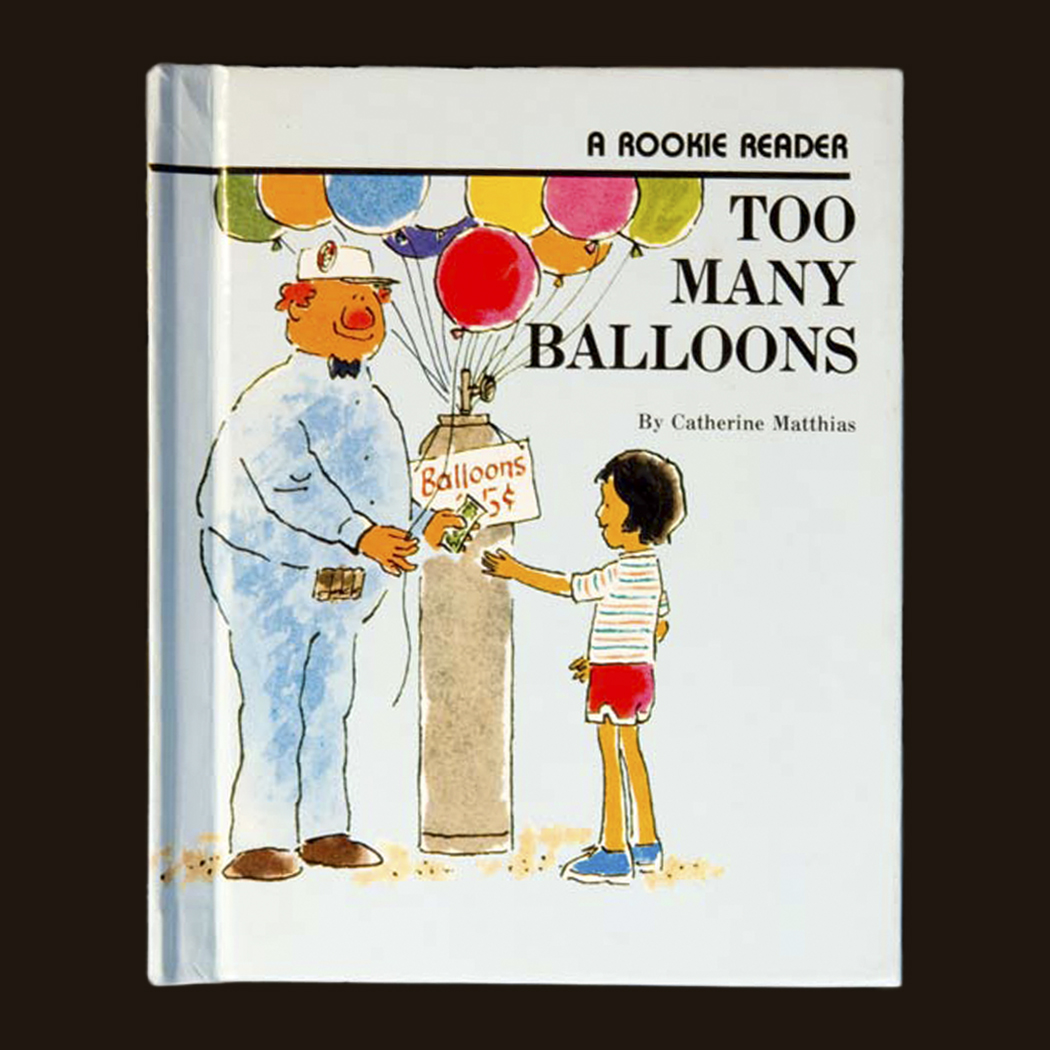 Too Many Balloons features a young girl (some readers think it’s a boy, and that’s fine) who buys different color balloons to show the animals in the zoo: one red balloon for the lion, two yellow for the giraffes, until she finally buys ten polka-dot balloons for the pigeons and realizes she has bought too many balloons. The story is told using just 50 different words and includes a vocabulary list. Published by Children’s press (Scholastic) in 1982, it received its 30th printing in 2004, and, along with I Love Cats, was chosen to be part of a three-book boxed edition. Illustrated by Gene Sharp. 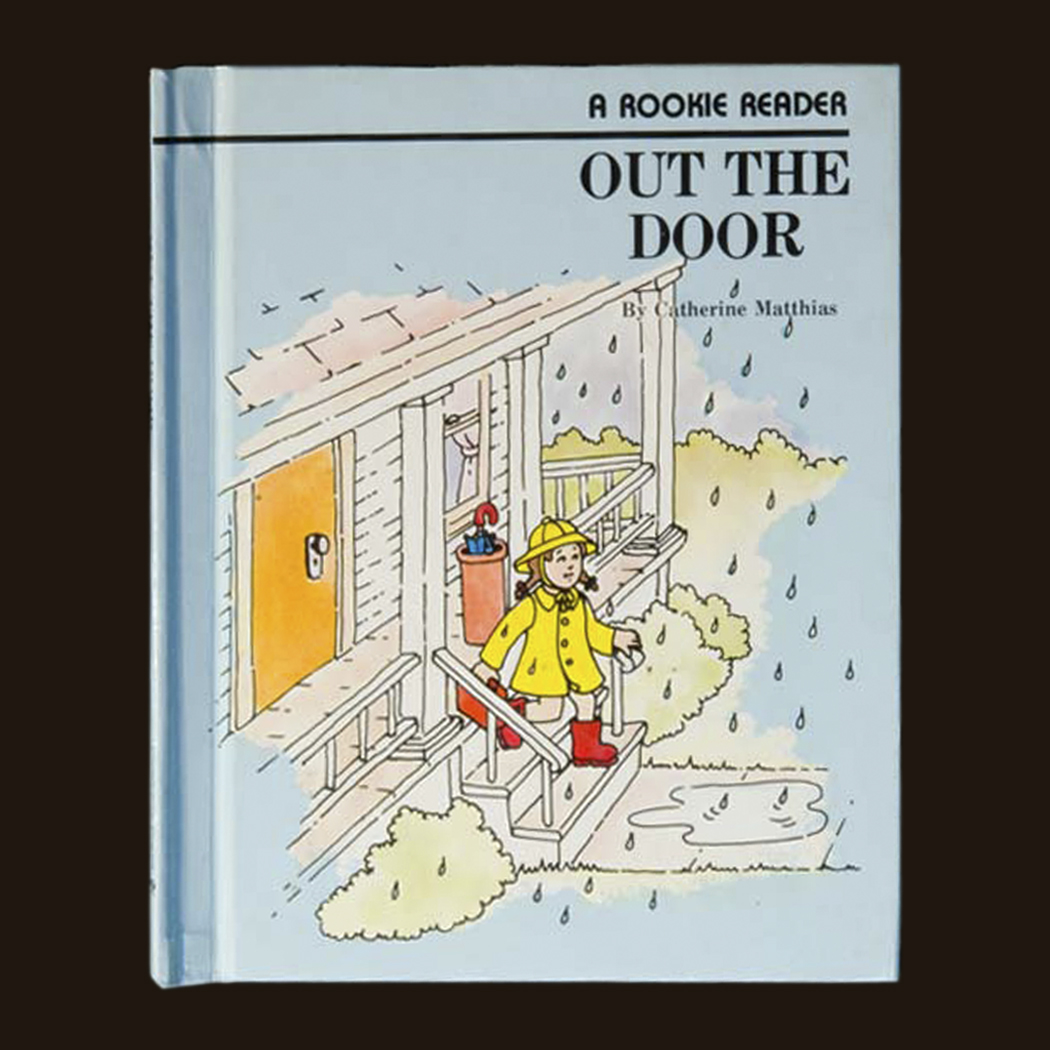 Out the Door uses 29 different words to tell the story of a girl’s day from leaving her house in the morning to arriving home after school. Every child can relate to the ups and downs of her day as she goes out the door until she comes back in the door. Published in 1982 by Children’s Press (Scholastic) as one of their Rookie Readers, it meets the following Reading First initiatives: Phonics – Vocabulary – Comprehension – Fluency. Illustrated by Eileen Mueller Neill. 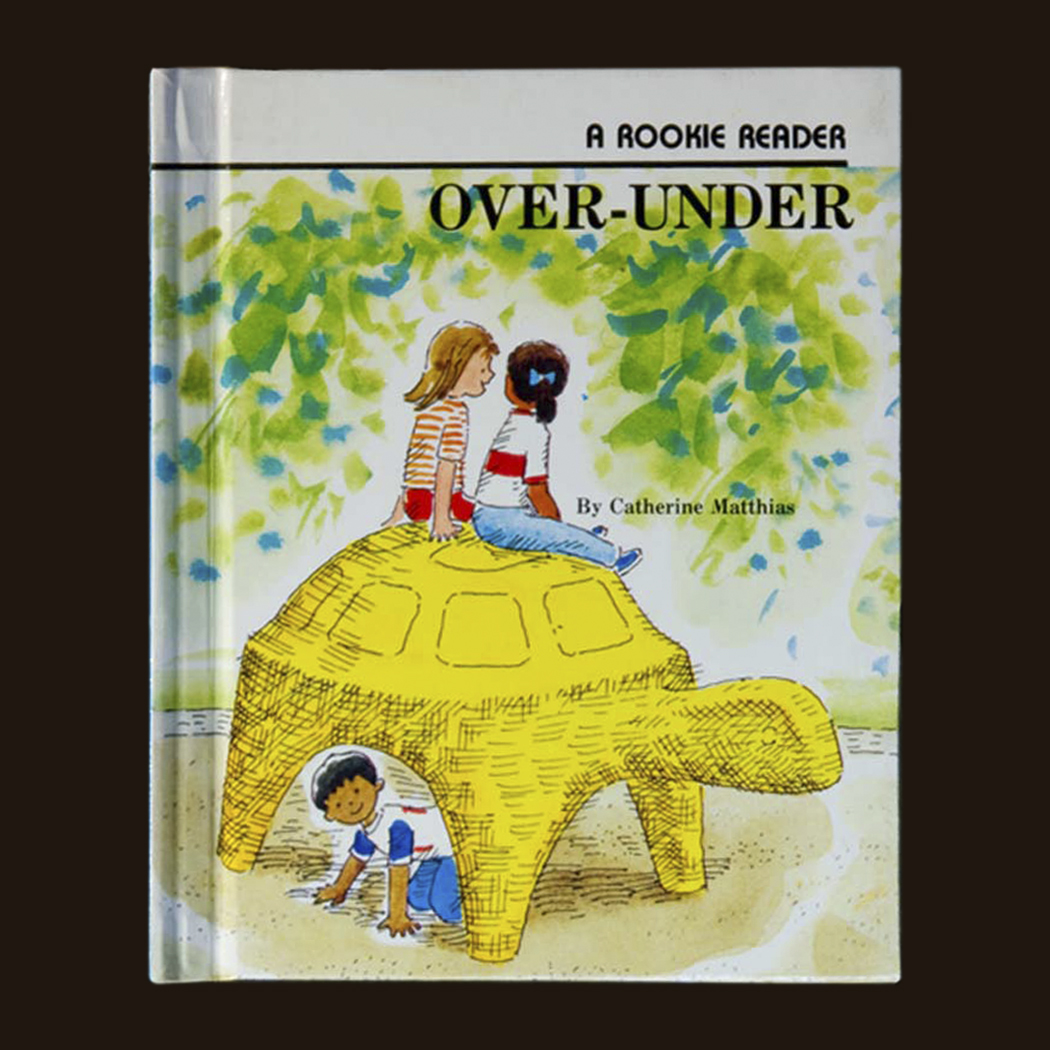 Over-Under uses prepositions – the words that show us our place in the world: over, under, on, off, in, out, between, below to follow a boy through the playground where sometimes he’s up and sometimes he’s down, but he’s always somewhere doing something. This story is told in 29 different words, and meets the following Reading First initiatives: Phonics – Vocabulary – Comprehension – Fluency. Published in 1984 by Children’s Press (Scholastic) as part of their Rookie Reader series. Illustrated by Gene Sharp.